The major Romano-British settlement at Walton le Dale (Walton-le-Dale) near Preston in Lancashire developed on the north bank of the River Darwen and south of the River Ribble just to the east of the confluence of the two streams. Both of these watercourses were forded a little way upstream of the point where they merged. The settlement has no defensive ditches or banks but was excellently protected by the two rivers, which almost completely enclosed the settlement on all sides, being open to attack only from the east.

Excavations conducted during the 1980’s revealed that a substantial Romano-British settlement was established here sometime during the Hadrianic period. Although no evidence of actual military occupation was uncovered, in the form of identifiable defensive structures or buildings with an obvious military function, the internal layout of the settlement is reminiscent of the interior of a Roman military camp, with ordered streets set out in a grid-like pattern. Evidence suggests that Walton-le-Dale was the scene of substantial industrial development, with many of its workshops producing military equipment. Production continued here until the late Antonine period, after which, many of the industrial portions of the village were given over to warehouses and granaries, and the emphasis shifted from production of military hardware to the storage of materials and foodstuffs.

The road leading north towards Calunium (Lancaster) crossed with another military road running east-west between the forts at Bremetenacum (Ribchester) and Kirkham on the north Bank of the River Ribble. The Roman crossroads actually lay about 2 miles north of the Walton-le-Dale settlement at Sharoe Green in Fulwood.

Although not mentioned in the second-century Antonine Itinerary, Walton le Dale lies on the course of Iter X, “the route from Glannoventa (Ravenglass, Cumbria) to Mediolanum (Whitchurch, Shropshire)”. This road links the Roman settlement at Coccium (Wigan, Lancashire) to the fort at Bremetenacum (Ribchester, Lancashire), and must have passed through the Romano-British industrial town here.

Over the centuries since the Romans established their military supply depot, the riverside margins of the settlement have been worn away, and a substantial portion of the original occupation area has been lost of the effects of river erosion.

The epic geographical treatise of the second century by Claudius Ptolemaeus describes the entire coastline to the west of Walton le Dale, naming Moricambe Aestuarium (Morcambe Bay) to the north and Portus Setantiorum (Fleetwood, Lancashire) which overlooks the bay, then the rivers Belisama and Seteia, respectively the River Ribble in Lancashire and the River Mersey in Merseyside. The Roman settlement at Walton-le-Dale, then, lay on the Belisama Fluvius.

Knowing the name of the River Ribble is no help in discovering the name of the actual settlement on its southern bank, but there is an entry in the difficult seventh-century work the Ravenna Cosmology which is of particular interest. Between the entries for Bremetenacum Veteranorum (Ribchester, Lancashire) and Lagentium (Castleford, West Yorkshire) there is an unidentified town named Pampocalia (R&C#125) which may be attributable to the Walton-le-Dale settlement, but equally, the name may apply to the nearby fort at Kirkham on the Fylde, or any one of at least half a dozen other unnamed Roman sites in north-east England.

There are no inscriptions on stone recorded in the R.I.B. for either Walton-le-Dale or nearby Preston.

Most of the coins recovered from this site were unearthed during excavations between 1981-83 (89 coins), while another 6 were recovered during the dig in 1949, and a further 12 are attributed to casual finds. Of all these coins, 5 are illegible, but one of which is almost certainly Flavian. Of the 100 identifiable issues, 33 are Flavian, 31 are Trajanic, 18 are Hadrianic, while the others range from a single unidentified republican silver coin to a copper of Constantius II (Imp. AD337-361), although there are only 4 coins which may be dated after AD222. 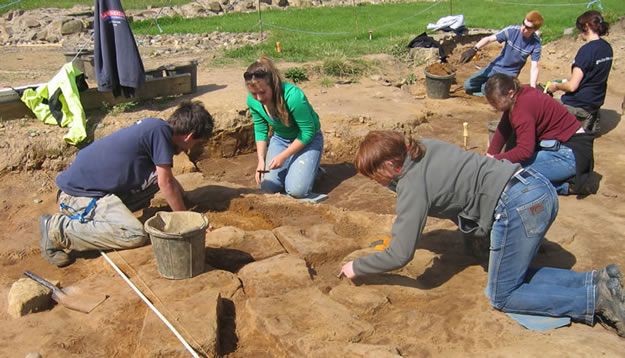