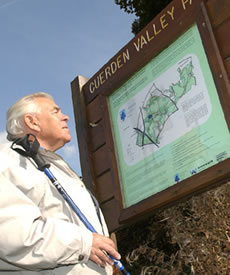 Cuerden Valley Park gives access to a large area of natural countryside lying alongside the River Lostock where car parks and picnic areas have been provided along with a 10-mile network of footpaths, cycle path and bridleways and a fishing lake/reservoir. The scenery is varied, including river banks, parkland, agricultural land, bluebell woods and wildflower meadows. Wildlife includes woodpeckers, kingfishers, great crested newts and dragonflies.

The Park consists of 650 acres of land lying along the valley of the River Lostock as it flows from Whittle-le-Woods to Bamber Bridge. About half of the land is let for agricultural use, mainly grazing. The river meanders through fluvio-glacial deposits of sand and gravel. In the northern section of the park there is an artificial lake stocked for coarse fishing, (where breeding birds include great crested grebe), and several ponds. Kingfishers and herons are frequently seen.

The northern part of the Park was laid out in the early 19th century as parkland for Cuerden Hall. A restoration project has been undertaken by Cuerden Valley Park Trust in conjunction with the Wildlife Trust to restore some of the features of the estate from 1883, including the Pinetum/American Garden with a viewing platform and the Victorian walled orchard with pear trees of traditional species.
Improvements have been made to the lake/reservoir. At the southern end of the Park, archaeological work is being carried out at Lower Kem Mill, a ruined bleach and dye works that burnt down in 1914, and some works to show the outline of the original buildings and provide interpretation boards.

A series of talks and walks is organised by the Friends of Cuerden Valley Park and there are school education programmes available by appointment on the site. A monthly conservation group of volunteers helps the Rangers with work in the Park. For more details, please contact the Rangers’ Office on 01772 324436.

There is a visitor centre at The Barn, Berkeley Drive, off Shady Lane, Bamber Bridge, where there is a display area, toilets and vending machines. Fuller meals may be obtained from the coffee shop at the Sue Ryder Home in Cuerden Hall, on the Park. The 600-acre park is owned by Cuerden Valley Park Trust, a registered charity, and is open all year. Information on both Cuerden Valley Park Trust and The Wildlife Trust for Lancashire, Manchester and N Merseyside (who own The Barn) can be obtained from the visitor centre,
which is open 9.00am-5.00pm on weekdays and reduced hours at weekends.

There are a variety of small broadleaved and mixed woodlands which have been extended by recent, mainly broadleaved planting. Most woods are carpeted with bluebells in the spring and a good range of birds is commonly seen, including sparrowhawk, great spotted woodpecker, nuthatch, treecreeper, long-tailed tit and goldcrest. The rough areas of tall herb, hedges, unimproved or semi-improved grassland areas, and willow and alder plantings near the river provide further variety. Apart from picnic areas, grass in public access areas is cut as for a hay crop to encourage wildflowers and butterflies. The Park Trust runs a small flock of Jacob sheep to help with grassland management.

South of Preston and north of Chorley. Easy access from junctions 28 and 29 on the M6 and junctions 8 and 9 on M61. Car parking as shown on the map. Regular bus service from Chorley and Preston along the A6. Nearest railway stations at Bamber Bridge and Leyland.

Click here for a map of the Paths in
the Park