The name Walton is derived from walh and tun, which means the farmstead or settlement of the Britons. The area was recorded in the Domesday Book as Waletune. In the thirteenth (13th) century it was recorded as Waleton and since about 1300 the village has been know as Waleton in le (la) Dale, or Walton in the valley.

The remains of a Roman fort at the junction of the River Darwen and River Ribble at Walton le Dale were discovered by accident in the middle of the nineteenth (19th) century. A number of Roman remains were found in Walton le Dale, which included pottery and coins. It is now thought that the fort may have been the Rigodunum of Ptolemy. The word Rigodunum translates to “The Fortress of the King”, “the royal fort” or “the king’s fort”. Ptolemy was an Egyptian astronomer, mathematician, and geographer of Greek descent who flourished in Alexandria during the 2nd century. In several fields his writings represent the culminating achievement of Greco-Roman science, particularly his geocentric (Earth-centred) model of the universe, which is now known as the Ptolemaic system.

Two oxgangs, which is an old land measurement, in Walton belonged to King Edward the Confessor in 1066, and after the Norman Conquest, was the Demesne (land attached to a manor, retained by the owner) of Roger de Busli and Albert Grelley. The manor passed in about 1130 to Henry de Lacy of Pontefract and was later granted to the Banastres and their successors the Langtons. John de Langton obtained the right to hold a weekly market and an annual fair in October in 1301. The manor passed from the Langtons to the Hoghtons of Hoghton who held the manor as mesne lord.

During the English Civil War the bridges over the River Ribble were the scene of skimishes between the Royalists and Roundheads. In 1644 Royalists were captured by Parliamentarians and Walton le Dale was the principal scene of the Battle of Preston, fought on 17th August 1648 between Oliver Cromwell and the Duke of Hamilton (James Hamilton the 1st Duke of Hamilton).

In 1715, during the second Battle of Preston, the bridge over the River Ribble was successfully defended against the Jacobites by Parson Wood and his parishioners of Chowbent.

During the Industrial Revolution there were four cotton mills in the area, including Flats Mills belonging to William Calvert which employed 400 workers and James Livesey and Son’s Moon Mill employing 130 workers. There was a cotton printing business and in 1800 Robert Whittaker established an iron foundry. The former cotton mill of William Calvert & Sons Ltd was located on Victoria Road in Walton-le-Dale. It was developed and expanded from the early 1800’s. By the 1860’s the mill employed over 800 people and by 1901 the company had over 3,000 looms and capital of £250,000. The company failed in 1931 and was later used by a paper manufacturer together with, wine shipper, Haworth & Airey. The older part of the mill, the spinning room, was destroyed by fire during the night of 20th-21st July 1938. The mill was demolished in the 1980’s to make way for the Capitol Centre Retail Park.

The History of Walton le Dale

An ancient village situated in close proximity to the Rivers Ribble and Darwen. The name of Walton le Dale appears more than once in most history books. Julius, in his quest to expand the Roman Empire, sent numerous battalions into the north of England, including Walton le Dale. An AD 1140 charter to Henry de Lacyof Blackburn gave reference to St Leonard’s Parish Church in Walton le Dale. The churchtower is typically 16th century in style, with stepped corner buttresses ground from limestone. 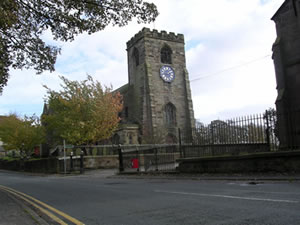 The church of St Leonard, situated on an eminence to the east of the town, was originally erected in the 11th century. The earliest portions of the present building are the Perpendicular chancel and tower, the nave having been rebuilt in 1798, while the transepts were erected in 1816. There are a number of interesting old brasses and monuments. Cotton-spinning is carried on, and there are market gardens in the vicinity. Roman remains have been found here, and there was perhaps a roadside post on. the site. The manor of Walton was granted by Henry de Lacy about 1130 to Robert Banastre. It afterwards passed by marriage to the Langtons, and about 1592 to the Hoghtons of Hoghton.

Walton was the principal scene of the great battle of Preston , fought on. the 17th of August 1648 between Cromwell and the duke of Hamilton.

In 1701 the duke of Norfolk, the earl of Derwentwater and other Jacobites incorporated the town by the style of the mayor and corporation of the ancient borough of Walton. In 1715 the passage of the Ribble was bravely defended against the Jacobites by Parson Woods and his parishioners of Atherton.

Midnight On the 12th August 1560 under the moonlight in St Leonard’s Churchyard, Occultist and scholar Dr John Dee summoned the spirit of a man who had died before giving the whereabouts of a considerable amount of money, its said that he was successful and the spirit did indeed tell the occultist the whereabouts of the wealth, but not before also telling Dee the fate of many of the locals, which is said to have later come true.

WALTON-LE-DALE, a village, a township, a chapelry, and a sub-district, in Blackburn parish and Preston district, Lancashire. The village stands on the river Ribble, 2 miles SE of Preston r. station; and has a post-office under Preston. The township includes Bamber-Bridge and Higher Walton villages and three hamlets; and comprises 4,630 acres. Real property, £22,358; of which £72 are in fisheries. Pop. in 1851, 6,855; in 1861, 7,383. Houses, 1,387. The property is much subdivided. W. Lodge, W. Hall, Darwen Bank, Darwen Cottage, Cooper Hill, Prospect Hill, Lostock Hall, and Highwood are chief residences. There are five cotton-mils, a print-work, an iron-foundry, and a corn mill; and market gardening is considerable. The chapelry formerly included all the township, but now excludes Bamber-Bridge and Higher Walton. Pop., 3,283. The living is a vicarage in the diocese of Manchester. Value, £300. Patron, the Vicar of Blackburn. The church was rebuilt about 1350, and partially restored in 1794, 1816, and 1861. There are a Roman Catholic chapel, a national school, and charities £78. The sub-district contains three townships. Acres, 9,400. Pop., 8,654. Houses, 1,634.

The above extract is taken from GENUKI, which provides a virtual reference library of genealogical information of particular relevance to the UK and Ireland. It is a non-commercial service, maintained by a charitable trust and a group of volunteers. For more information about GENUKI visit their web site: